One week later, everything seemed to be slowly getting back to normal. At least as normal as it could get in Megakat City. When the news of Dark Kat's and Hard Drive's arrests had been spread the people who had been evacuated by the Enforcers returned to the city and the Leviathan had also entered port. Being back at their rightful places, Mayor Manx and Callie Briggs continued governing Megakat City once again. They would probably have to raise taxes again in order to cover the costs for the repairs the city desperately needed after Dark Kat's short term of reign.

At the scrapyard, Chance and Jake were working on a customer's car. Last week's incident had rapidly increased the demand for car repairs. Outside of the garage, another car had just arrived. Chance and Jake heard how its door was being slammed.

“Another customer?” Chance asked as Jake looked towards the entry door. The sun was shining through it such that he couldn't clearly see what was going on outside. Then he saw the silhouette of a kat which seemed to be quite familiar to him.

“Hey guys, got a minute to talk?” Matthew asked as he came closer. “Or are you too busy right now?”

“Look what the cat brought in, Jake.” Chance said as he recognized Matthew's voice. “What have you been up to in the last few days?”

“Oh, you know, to this and that.” Matthew said smiling. “Mostly resting and thinking about what has happened to me. I also assisted Alfred helping the Enforcers to locate the bombs that Dark Kat's minions had placed throughout the city. Our mosquito drones were quite helpful finding them. Hopefully we found them all.” Then he added: “Oh, and thanks to Ms. Briggs, I won't be accused for the drone attacks and everything related to it.”

“That's great to hear!” Jake said. “And it sounds like you've been quite busy.”

“Yes.” Matthew replied. “I hoped that helping the Enforcers would gimme some redemption and cool down the heat between Feral and me... But I didn't really found my redemption yet.”

“You have to stop blaming yourself, Matthew.” Chance said.

“That's easier said than done, Chance, but I'm trying.” Matthew replied and started to look serious at him. “There is another thing,” he began to say.

“Well, what is it, Matthew?” Chance asked curiously. “I've quit my job at Young Digital Entertainment.”

“Mr. Young was about to move his business out of Megakat Tower because he felt that the building attracts bad luck.” Matthew started to explain. “But without Young Industries Megakat City would probably face even more problems than it already does. Luckily, I was able to convince him to stay and explained him that it was our work which lead to this disaster. He wanted me to stay nonetheless, but I've decided to quit.”

He looked down at the ground while he made a short pause and sighed.

“I can't just go on like that with what I've experienced in the last few days, you know. I have to think about everything for a while before I can continue making games. You see, currently I'm afraid that any code I'd develop might be misused again. I couldn't sleep at night with this on my mind.”

He paused for a another moment and continued with a sad look on his face.

“I guess Hard Drive has won although he has been beaten. He promised me that I would never get Sally back and that he would destroy me... he was right. The Matthew Doubt you knew has left and he will probably never come back.” Then Matthew started smiling at Chance and joked: “I guess you have to find a new favorite game developer, I'm afraid.”

Chance's look on his face obviously showed that he didn't knew what to say.

“So what are you gonna do now?” Jake asked to change the subject.

“I'll stay at Alfred's place for a while. We've experienced similar fates. So maybe each one of us finds his redemption by helping the other. I think it's worth a try, don't you think?”

“I'll also try to help him with his inventions. Maybe I can learn something from him. And I'm sure you've noticed that he isn't the healthiest kat anymore. I think it's better that there is someone around in case something happens to him.”

“Sounds like a plan. I hope this is helping both of you.” Jake replied.

“Me too... Well I guess I've kept you long enough away from your work, so I don't want to bother you any longer.”

“Oh c'mon, Matthew you are not bothering us.” Chance protested.

Matthew smiled and said: “I know Chance, but it's time for me to go. I come visit you again when you are not drowning in work and I've recovered some more. You can come visit me too, if you like.”

“We certainly will,” Jake replied. “But just wait a moment. I'd like to give something to you.”

Then Jake left the room. Matthew assumed that he went down into their secret hideout. A minute later he came back with a rather large package and gave it to Matthew.

“What's in it?” Matthew asked.

“You'll see, when you open it.” Jake said smiling. “But make sure you are alone when you do, okay?”

“Sure Jake, okay.” Matthew replied, still wondering what was in the package. “Well then, we'll see each other soon. Farewell then.”

Matthew smiled, nodded and walked out of the garage carrying the package in his hands. While walking towards Alfred's car he looked at all the other cars which were waiting to be repaired. He turned around and joked:

“Say, is this your strategy to keep your business running?”

“What do you mean?” Jake asked.

“I mean, letting the bad guys break up everything and then repair it in order to earn money. Interesting way to pay the bills.” Matthew answered with a smile on his face.

“Matthew... get lost.” Jake replied and smiled back at him.

“See ya.” Matthew stepped out of the garage and opened the door of the pickup. After he had safely placed the package inside the car he got in, started the engine and drove away.

When he had reached Professor Hackle's lab he took the package out of the car and carried it inside.

Before he went up to the apartment upstairs which Hackle had provided to him, he stepped by the lab and checked what he was doing. Hackle stood in front of his workbench and worked on one of his robot designs. He still hoped that they would be a benefit to katkind someday in the future.

Hackle turned around to look at him and replied: “Hello Matthew. Yes, I've already noticed.” He pointed at a screen showing the front entry of the compound. Hackle had installed some cameras in case the Metallikats, the two ex-mobster-bosses he once saved by transferring their minds into robots without knowing who they were, would decide to pay him a visit.

“You're really afraid that they may come back someday, aren't you?” Matthew asked concerned about Hackle's peace of mind.

“Mac and Molly were only prototypes when we went separate ways. Their circuits and their hard drives won't be lasting forever without proper treatment. As soon as they'll realize they'll come back here and force me to fix them.” Hackle explained. “But I cannot allow that to happen. They already did a lot of inexcusable things for which I can't deny my responsibility. There has to be an end to it.”

Then he pointed with his finger at the package that Matthew was carrying. “You've received a present?”

It was obvious that he wanted to change the subject as talking about the Metallikats made him feel uneasy. So Matthew played along and answered: “Yes, it's from two friends of mine.”

“I see.” Hackle said with a smile on his face.

As he didn't say anything else Matthew asked him: “Can I help you with anything, Alfred?”

“No, I don't need anything right now, thank you. But you've still haven't finished settling, haven't you?” Hackle noted. “You should get on with it. Otherwise you'll never get comfortable here, you know.”

“I guess you're right. Well, see you later.”

Alfred nodded and turned his attention back to his designs.

Matthew walked up the stairs to the first floor and opened the door to his apartment. 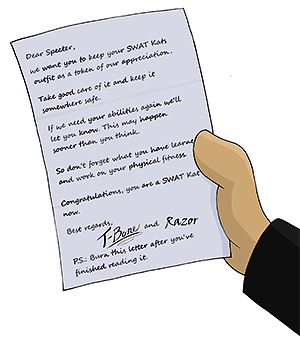 We want you to keep your SWAT Kats outfit as a token of our appreciation.

Take good care of it and keep it somewhere safe.

If we need your abilities again we’ll let you know. This may happen sooner than you think.

So don’t forget what you have learned and work on your physical fitness.

Congratulations, you are a SWAT Kat now.

P.S.: Burn this letter after you’ve finished reading it.

Matthew sat down on his sofa while his thoughts were drifting away. When he finally was able to put himself back together again he looked out of the window. It was getting dark outside. Matthew didn't know how long he had been just sitting around, but he assumed that several hours had passed. He crumbled the letter and put it into a small bowl which stood on the table. Then he started searching his packing cases until he found a box of matches with the Young Digital Entertainment logo on it. He took one of the matches out of the box and ignited it. Then he put the match into the bowl next to the crumbled letter which quickly caught fire. He watched as the letter burned down to ashes and waited until it was cold. Then he emptied the bowl into a litter bin and put it back on the table. After that, he picked up the flight suit again.

Later that evening Specter stood on the rooftop of Professor Hackle's lab, gazing into the sky, waiting to see the Turbokat somewhere. And after quite some time he actually saw her patrolling over Megakat City.

Although he felt like as there was not much left of him, he still tried to get a smile on his face and said: “Maybe being a vigilante helps me find redemption someday. So if you ever need me... I'll be there.”